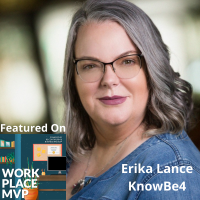 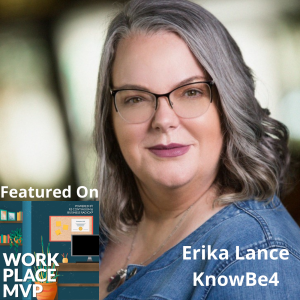 Recently named 2021 OnCon HR Professional of the Year, Erika Lane, Chief Human Resources Officer for KnowBe4, joined host Jamie Gassmann to discuss her career journey and share her experiences and ideas on hiring the right person for the job and the culture, holding the hiring individuals responsible for the quality and fit of that hire, and how KnowBe4 retains and supports their “Knowsters.” Erika also explains KnowBe4 initiatives like Project Restart, for workers stuck in careers they don’t enjoy, and Project New Start, for veterans and first responders who are changing careers. Workplace MVP is underwritten and presented by R3 Continuum and produced by the Minneapolis-St.Paul Studio of Business RadioX®.

KnowBe4, the provider of the world’s largest security awareness training and simulated phishing platform, is used by more than 35,000 organizations around the globe. Founded by IT and data security specialist Stu Sjouwerman, KnowBe4 helps organizations address the human element of security by raising awareness about ransomware, CEO fraud and other social engineering tactics through a new-school approach to awareness training on security.

Kevin Mitnick, an internationally recognized cybersecurity specialist and KnowBe4’s Chief Hacking Officer, helped design the KnowBe4 training based on his well-documented social engineering tactics. Tens of thousands of organizations rely on KnowBe4 to mobilize their end users as the last line of defense.

Forrester Research has named KnowBe4 a Leader in the 2020 Forrester Wave for Security Awareness and Training Solutions. KnowBe4 received the highest scores possible in 17 of the 23 evaluation criteria, including learner content and go-to-market approach.

The KnowBe4 platform is user-friendly and intuitive. It was built to scale for busy IT pros that have 16 other fires to put out. Our goal was to design the most powerful, yet easy-to-use platform available.

Customers of all sizes can get the KnowBe4 platform deployed into production twice as fast as our competitors. Their Customer Success team gets you going in no time, without the need for consulting hours.

They are proud of the fact that more than 50% of their team are women, where the average in cybersecurity is just 20% of employees.

With over 25 years of experience and prestigious awards such as the 2021 OnCon HR Professional of the Year Award and the 2018 Tampa Bay Business Journal’s People First Award, Lance is a distinguished leader in the Human Resources field. She has been promoted to chief human resources officer at KnowBe4 where she is responsible for leading the global HR team and developing new initiatives for recruiting, retention, company culture and diversity. Under her leadership throughout the last few years, the People Operations team has grown from 10 team members to over 50 team members in 11 countries across six continents. Lance is most well known for her radical transparency and her people-centric approach to Human Resources.

The OnCon Icon Awards recognize the top HR professionals and HR vendors in the entire world. Finalists were voted on by peers to determine the winners. Voting on finalists was open to the public and was based on the following criteria:

“As HR leaders we’ve dealt with a lot of changes this year, and I’m sure there are still more to come,” said Lance. “The fact that we’re talking about and awarding the successes from this year just shows that we’re doing something right. We all adjusted to working from home. We all had to get used to this new way of life and hopefully we’ve all figured out ways to keep our employees happy, healthy and engaged while working remotely.”

Lance was recognized for spearheading new employee initiatives during COVID-19 pandemic to keep energy and morale high. Her leadership has directly positively influenced KnowBe4 and its employees. 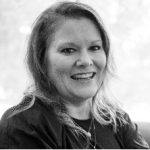 In addition to serving as the host to the Workplace MVP podcast, Jamie Gassmann is the Director of Marketing at R3 Continuum (R3c). Collectively, she has more than fourteen years of marketing experience. Across her tenure, she has experience working in and with various industries including banking, real estate, retail, crisis management, insurance, business continuity, and more. She holds a Bachelor of Science Degree in Mass Communications with special interest in Advertising and Public Relations and a Master of Business Administration from Paseka School of Business, Minnesota State University