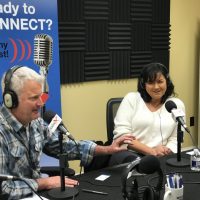 Greg Godwin is co-owner of Pedego Electric Bikes Alpharetta with his wife Tina. The Pedego Electric Bikes brand was founded in 2008 by Don DiCostanzo and Terry Sherry, two friends in California. Don lived atop a giant hill that took the fun out of cycling to the beach. Over time he bought several electric bikes for the trek, which also drew the interest of his friends. However, he became disappointed with the bikes’ poor quality, so Don decided to create his own electric bicycles. Pedego Electric Bikes, born out of Don’s vision and Terry’s technical expertise, is now a leading brand in the industry.

Greg is an avid cyclist and always dreamed of owning a bike shop. While researching ebikes, he learned of Pedego and knew it was the right fit. Rather than a franchise, Pedego Alpharetta opened as a dealership, which allowed Greg and Tina to build the store to their vision.

North Fulton Business Radio” is broadcast from the North Fulton studio of Business RadioX®, located inside Renasant Bank in Alpharetta. Renasant Bank has humble roots, starting in 1904 as a $100,000 bank in a Lee County, Mississippi, bakery. Since then, Renasant has grown to become one of the Southeast’s strongest financial institutions with approximately $12.9 billion in assets and more than 190 banking, lending, wealth management and financial services offices in Mississippi, Alabama, Tennessee, Georgia and Florida. All of Renasant’s success stems from each of their banker’s commitment to investing in their communities as a way of better understanding the people they serve. At Renasant Bank, they understand you because they work and live alongside you every day.