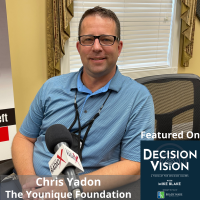 Decision Vision Episode 145:  Should I Start a Foundation? – An Interview with Chris Yadon, The Younique FoundationJohn Ray
Download Audio 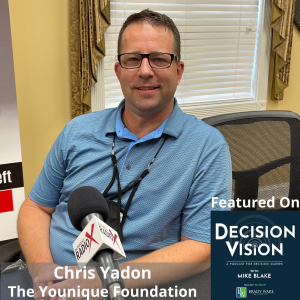 Decision Vision Episode 145:  Should I Start a Foundation? – An Interview with Chris Yadon, The Younique Foundation

What is a foundation, how do you start one, and what are the essential bases to cover from the outset? Chris Yadon, Executive Director of The Younique Foundation, and host Mike Blake dive into the details of effectively creating and running a foundation, funding, giving out money, governance, and much more. Decision Vision is presented by Brady Ware & Company.

The Younique Foundation aims to inspire hope in women who were sexually abused as children or adolescents by providing healing services through educational retreats, support groups, and online resources.

They educate and empower parents and caregivers to protect children from sexual abuse through community and online resources.

They advocate for open discussions about sexual abuse through community dialogue and social awareness.

The Younique Foundation exists for the purpose of helping adult, female survivors of child sexual abuse navigate their healing journeys. We provide a range of free services, including:

He has previously held leadership positions in the start-up, tech, and nonprofit industries. He brings a valuable skillset to the organization and is deeply committed to addressing the epidemic of child sexual abuse. Chris plays a vital role as a spokesperson for The Younique Foundation. He is a sought-after local speaker and has also been invited to present nationally and internationally.

His expertise centers on heightening awareness to the epidemic of child sexual abuse, as well as educating the public on best practices for prevention and the healing services available to survivors. Chris has been featured across several media platforms where he is often requested to contribute as an industry thought leader and expert.

Chris considers his family as his greatest accomplishment. He is the grateful father of six children: three boys and three girls. He and his wife, Christy, have been married for 22 years.