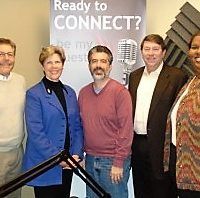 Located in Midtown Atlanta, the Center for the Visually Impaired (CVI) has empowered people with vision loss to live with independence and dignity for 50 years. As Georgia’s largest comprehensive, fully accredited organization providing vision rehabilitation services, the programs of CVI include: support groups, The Florence Maxwell Low Vision Clinic, New View adult rehabilitation services, STARS program for elementary to high school students, and a BEGIN program for infants and children up to age five. The CVI enterprises located onsite include the non-profit VisAbility Store and the ClearAnswer Contact Center.

Biscardi Creative Media, located in Metro Atlanta, is a full service script to screen Creation Company at the forefront of creative media production. Emmy-award winning broadcast programming, episodics, commercials, feature films and corporate marketing video productions are some of the projects their storytellers bring to the screen every day.

A recognized leader in creative digital design, Walter Biscardi, Jr. launched BCM in 2001 with a single purpose: bring art to digital media. Today’s world is overwhelmed with technology, but it takes good storytellers to bring your message to life in an effective and entertaining way. In other words, the latest digital tools don’t make a quality production; the artist using those tools do. Drawing on over 20 years of industry experience, Walter pulls together a creative team that has amassed every major award and traveled to every country in pursuit of a single goal: The story.

Original programming for both new and traditional media is in development through sister company MTWD Entertainment. Walter is Executive Producer and Director for MTWD.

Founded in 1977, Golden Key International Honour Society is a global collegiate honor society established to recognize college students for academic excellence. While membership in Golden Key begins with academic excellence, the Society’s core mission is to enable members to realize their potential through three pillars: academics, leadership and service. The Society, comprised of over 2 million members, has more than 400 campus-based chapters in eight countries, including Australia, Canada, India, Malaysia, New Zealand, South Africa, The Bahamas and the United States.