The correlation between fitness and work productivity with Patrick Whaley of TITIN.lauriegenevish
Download Audio

Fitness is one of many facets of your life that effect your immune and central nervous systems. Studies have shown that individuals who workout 2-3 times a week are happier and have more energy. 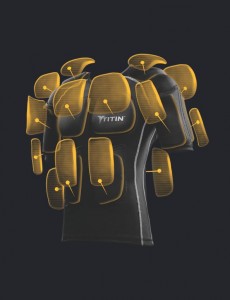 TITIN Force is a unique form of workout gear made up of three components. A 14-pocket inner shirt features A.M.Y.® antimicrobial materials to block odor and germs. Patented, fit-right, hydro-gel inserts are inserted into the pockets to provide eight pounds of weight during workouts. Third is an outer compression shirt that’s double-stitched and features Sorbtek® to pull moisture away from the body four times faster than other fabrics. The compression shirt securely holds the gel inserts firmly in place during the most strenuous workouts.

Along with enhancing workouts, The Force can be worn hot or cold for post workout regeneration. Heated or cooled, the indestructible hydro-gel inserts retain their flexibility for maximum comfort during workouts. Simply place the TITIN Force in a microwave or freezer and it transforms into a 45-minute hot compress or mobile ice bath.

Wearing a TITIN Force during workouts or most any type of sports training creates a HyperGravityTM training environment that can help with weight loss, muscle building, improved balance and increased speed. Wearing a Force shirt system prior to competing, or “pre-loading”, can deliver measured results. Testing has shown TITIN Force can provide up to a 13% increased vertical leap, an 11% increase in endurance and a 3% increase in running speed.

Patrick Whaley, founder of TITIN Tech said, “I set out to create a weighted shirt that could be comfortably worn during football practice, CrossFit training and most any other type of workout without restricting body movement. That’s what we accomplished. Wearing a TITIN Force is like training on earth and playing on the moon.”

The eight pound weight of TITIN Force was determined by safely adding 2-5% of body weight to an individual weighing 160-180 lbs. Hydro-gel inserts can be added or removed to adjust the weight of a TITIN Force. Both the 14-pocket inner shirt and outer compression shirt are machine washable for easy care. The TITIN Force is sized from small to XXL.

TITIN’s award-winning product has won over $70,000 from business plan competitions to assist in commercializing his technology. In 2012, TITIN won $10,000 from the Under Armour Innovation Challenge. Prior to that in early 2011, his technology also won the “Most Fundable” award and “Most Bankable” award at the GT Business Plan Competition and Rice Business Plan Competition (the largest business plan competition in the world), respectively. He also won the “Outstanding Product of 2011” at Global Venture Labs in Austin, Texas. His products were also dubbed “The Next Big Thing” by CNN. Such competitions also included winning 1st Place and “People’s Choice Award” in the GT InVenture Prize competition 2010.

Visit TITIN website to learn more. You will receive free shipping if you type in RADIO when placing your order.

You can reach Patrick via email.